My efforts from last winter are bearing fruit (so to speak).  Look at my ten year old Yoshino Cherry tree.  It has never had leaves this size before.   Deer kept them trimmed all year.

Not only does the tree-pee provide a barrier, it has moving elements made of old vines that could scare a nosy deer.  It also has upsetting branches that lay on the ground around the tree and tip up.  In years to come we might be able to see a  blossom on this tree!

The snow ball bush is also growing well.  They are such amazing plants.  Have observed that they bloom on last year’s wood.  The whole top of the bush which at this time parallels the  top of its tree-pee is vacant of blossoms.  Next year, it will be spectacular.  How interesting this will be as the bush and the tree-pee integrate as one in future! 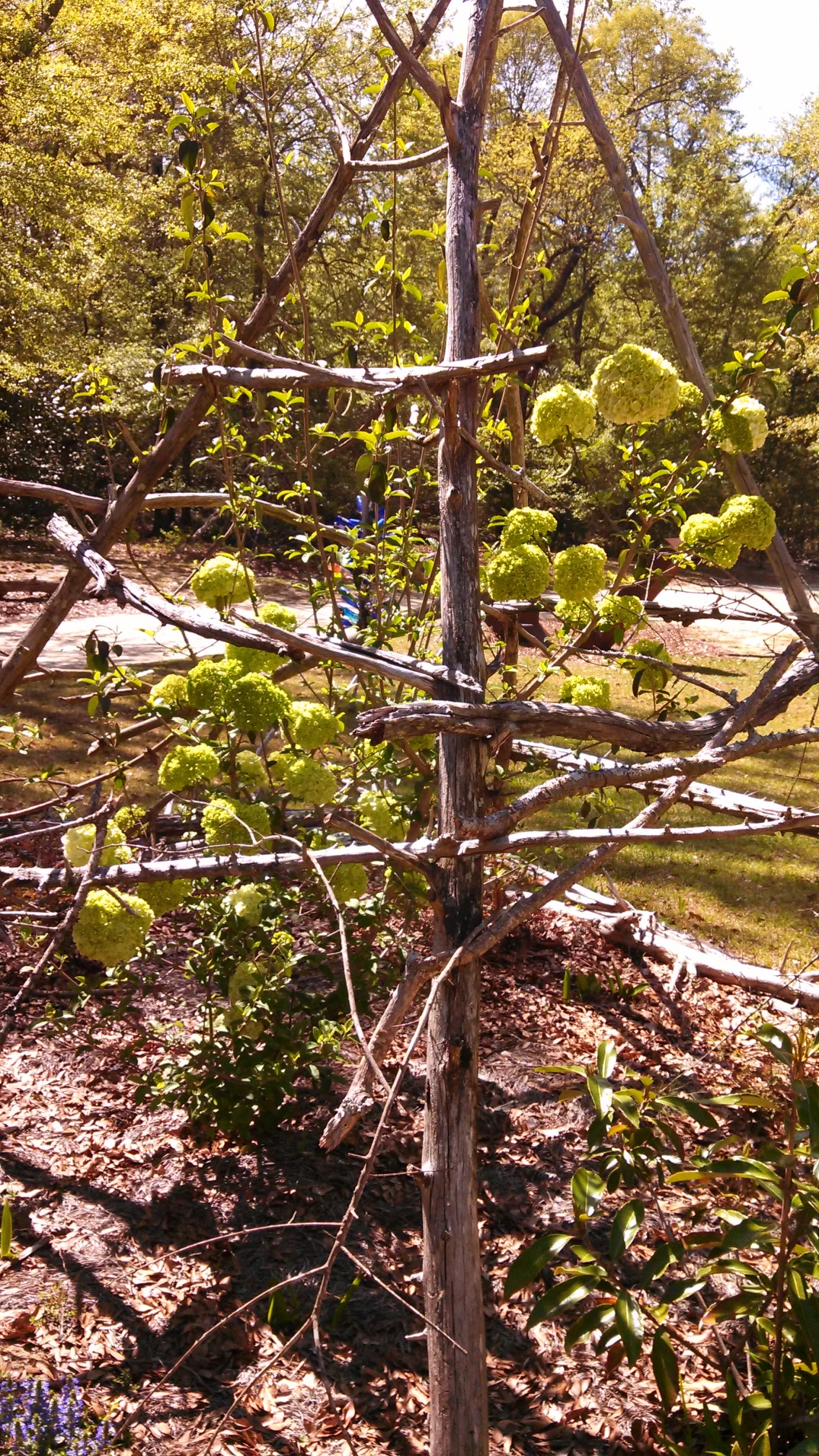 See the spikes which upset the little hooves?

The pyracantha had to be protected too.  Was surprised that the bush got new leaves all winter, but this week’s progress went gangbusters.  This was partially due to the fine spring weather, our irrigation system (plus very good rain), and the tree-pee over the garden.  The deer love this bush.

Below is the bush from the middle of last winter, with the snow ball bush behind it. 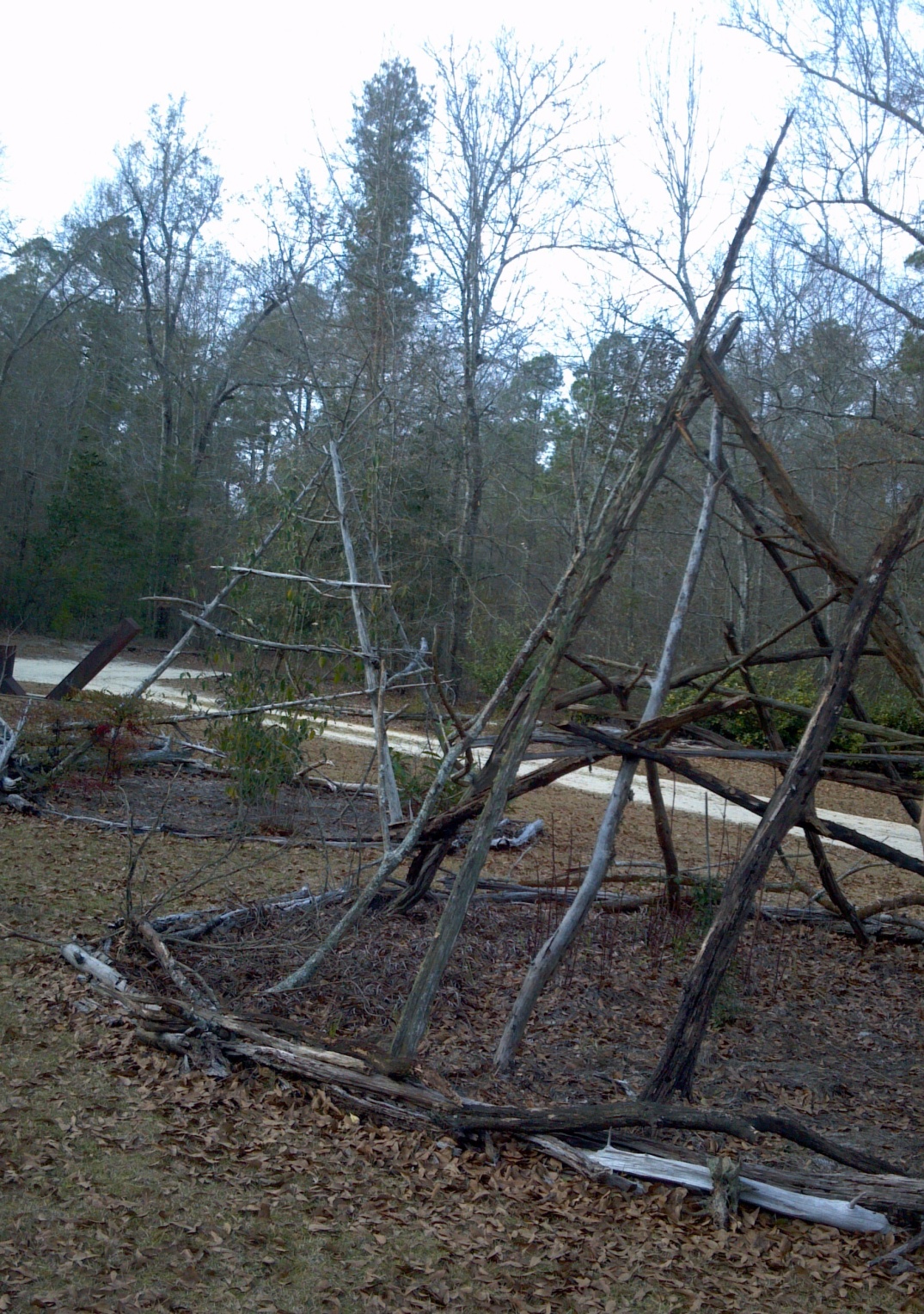 ROSEMARY VEREY AND THE WINTER GARDEN

We have masses of dead cedar in our woods, in various stages from just dead to very dead.  And we also have lots of deer.  Turns out cedars and deer are one of nature’s juxtapositions:  if you have deer, you are going to need lots of cedar to keep them out of your gardens.

It is amazing how light and how strong cedar is.  With the right engineering, a protective pyramid can be built around bushes and young trees that deer can’t leave alone.

I have taken to placing cedar not only as a screen, but am trying to interfere with the deers’  footing down below.  On the back of this circle branches with mean short limbs are pointing up.  The red bush is nandina which deer do not eat, but behind it is a snowball bush, which they love.  The snowball looks very shabby and lifeless this time of year, but it will be magnificent in the spring. 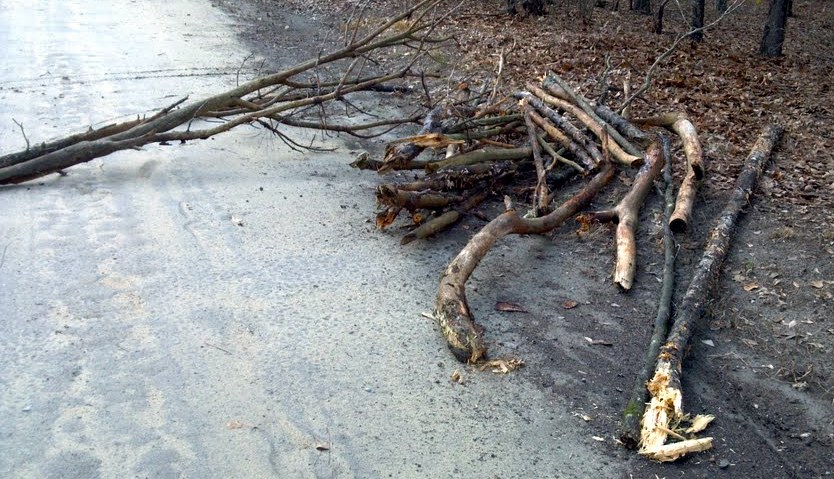 So all manner of cedar branches are helpful, and cost nothing.    I know that is a pine to the right.  It was just so straight, and it will be helpful as a base.  True, it will disintegrate before the cedar, but all these gardens have to be refreshed every year or so.  The deer knock the branches out of place. 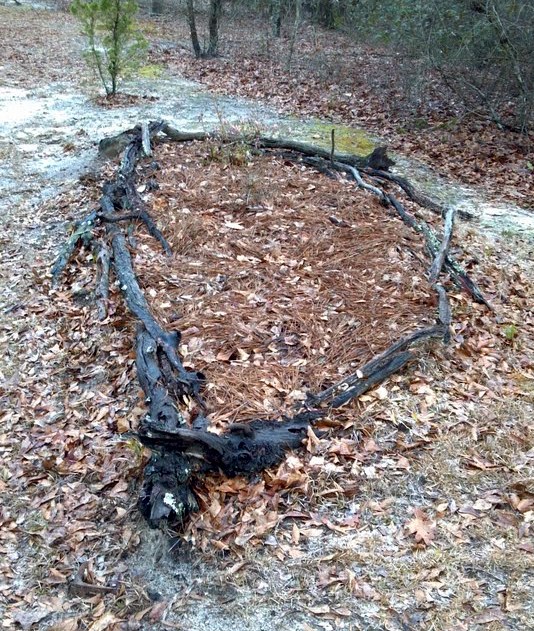 Gardens like this are spotted along the sandy driveway with woods on either side.  They have either azaleas (very small now) or loropetalum in them.  Some of these gardens do not get enough sun.   The size of the bushes vary dramatically.  These gardens do not need pyramids as the deer don’t eat loropetalum, and only rarely bother azaleas ( there is some crunching now and again).

The loropetalum are full of buds here. 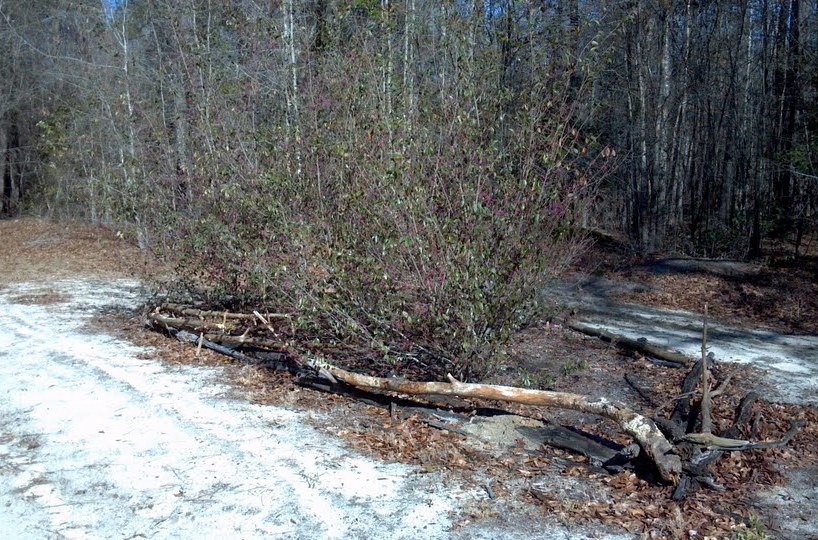 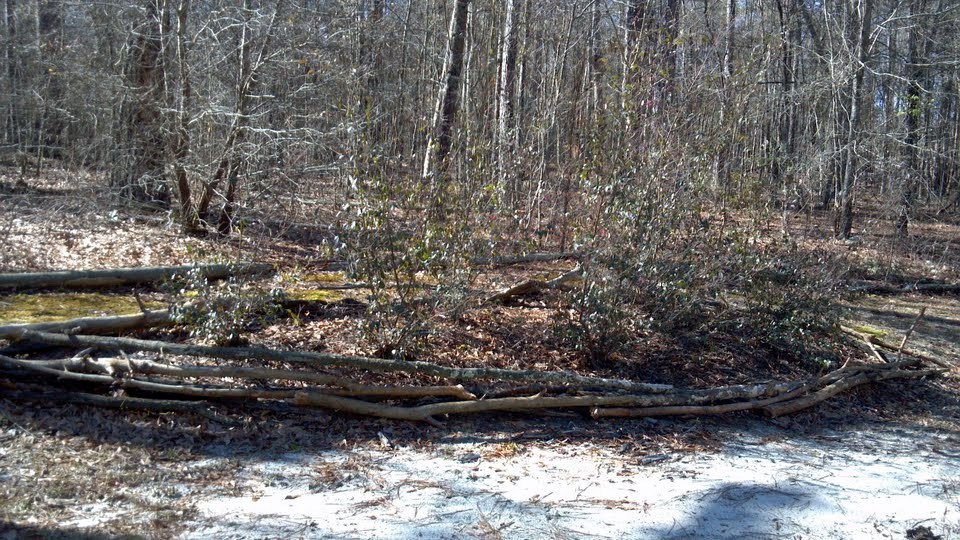 I painstakingly worked to propagate 12 slips of pyracantha last summer.   It wasn’t going well.  Ended up buying a small one, which is now protected by a pyramid of cedar.  Only one of my slips survived and it was doing sooooo well once it was placed in the ground.   The deer had not discovered it yet, and I was hoping that the new little garden where it lives would remain undiscovered to them.  NOT!

I had to resort to a milk crate for its protection.  A tiny pyramid simply would not do.  That bad deer ate three inches of its hard fought four inches!

Back at home in SC, this picture from yesterday, travel day, seems like a dream.

A bad dream.  But the holiday trip to the Midwest was the finest of bad dreams.  The snow and ice we experienced was like this:  beautiful, untouched and viewed from inside our car which was going at normal speed.  What I most love about snow is how it reveals the forest floor, which one can never see in the summer.  Ice defines the lines of the branches of deciduous trees, snow fills out the big shapes of the evergreens, and traces the forest floor.  Defined by snow and ice, the whole forest makes a fantasy-like sense.  In the summer, the woods are deep and spongy like one alive but unreadable shape.

We all know about last winter.  Here in SC, where we live with the most marginal of heat sources (gas log, occasional space heater) it was all so marvelous.  We could be outside all winter.  Making soup in the kitchen was enough to get warm (having lived without real heat for 7-8?? years, I now understand about making soup, washing dishes just after dinner [think 1945]; it makes so much warm sense).  Eating soup was enough to get warm.

Contrast this picture above with the Midwestern winter; they were taken the same day.  My daughter’s two horses have a visit with the mother and grandmother of one.  They have warm sunshine and grass to eat.  Nice little vacation for two horses from Virginia.

Yesterday was Garrett’s sixteenth birthday, and we planted this little magnolia in celebration of that.  We have so many trees that stay green all winter here. 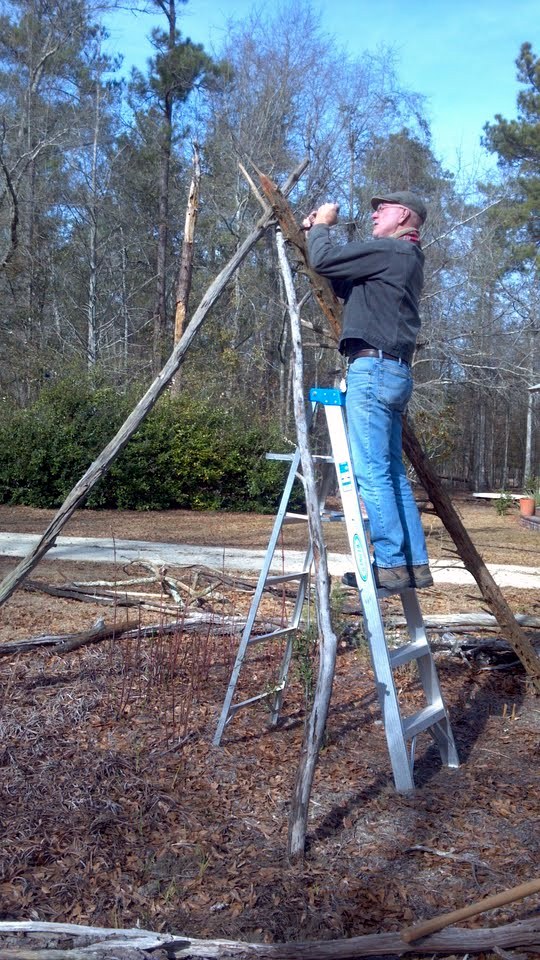 It is also warm enough to finish the construction of our third tee-pee which protects certain bushes and trees from the deer.  I feel so lucky to have so much cedar, dead and alive, on our acreage.  It is beautiful and can do so many jobs.

This winter is not over of course, but here we are not seeing much difference from the moderation of last winter.

The only life force around here to challenge my Mouse’s would be in the little yoshino tree on the drive.  It is about ten years old and is a pygmy.  The deer strip it down to nothing every winter.  Now the deer are eating tiny leaves on my new pyracantha, so on this quiet Christmas Eve I went collecting fallen cedar in the woods.  Love doing this.

This is my Mouse, almost sixteen years old.

You can hardly see the little tree with all these armaments.  We have these amazing vines in our woods.  They get very large and feel dense like hardwoods.  They grip and strangle a tree.  When you find a dead one on the ground, they can be configured in useful shapes. 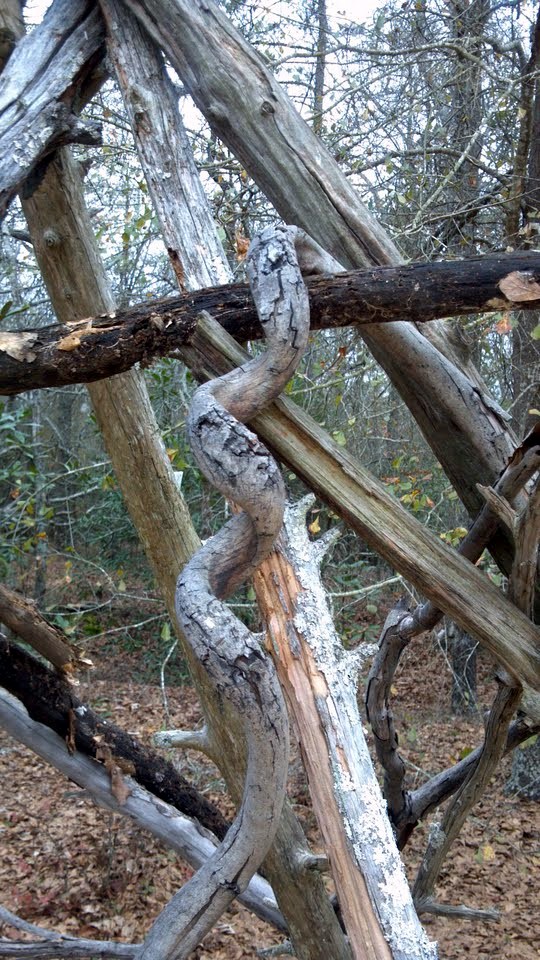 This vine swivels on its crossbar.  That should shock the deer when they get their noses too close!  Maybe next year I will have some leaves, and later can lay off the tee-pee when the tree gets bigger than deer height.  I should live so long. 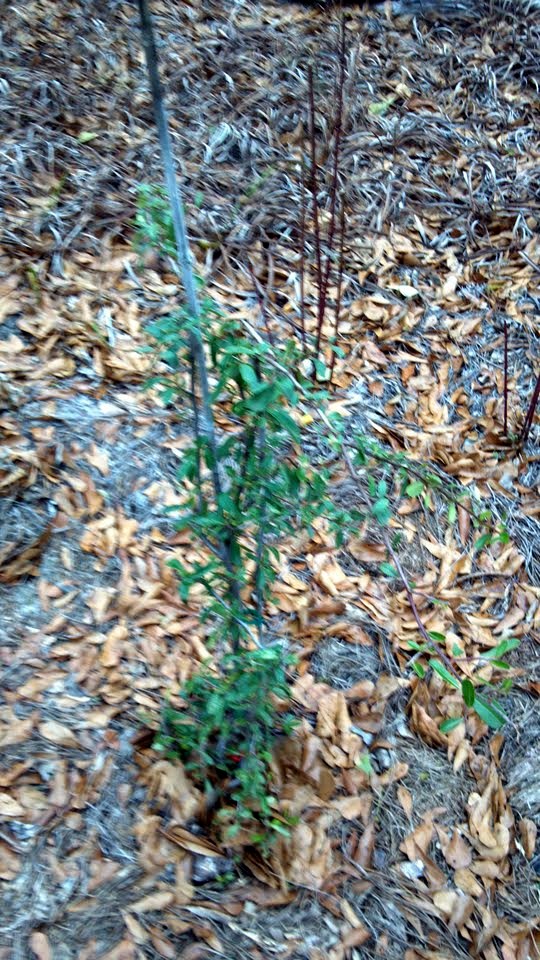 Above is the pyracantha which needs saving.  Having planted it around August, it is still leafing out, in the winter.   Another,  one of 12 cuttings taken and the only to survive,  is making new leaves like crazy now too.  I have a lot to learn.

This tee-pee, built last spring did a great job of keeping the deer from eating this snowball bush.  It has been blooming all fall, misstep-ping like the pyracantha.  What goes?  You can see the remainder of the last flowers.  In this fall blooming however, big full snowballs were not produced.  The flowers were less than half of a sphere, and flat on the bottom.

The “teeth” laying on the ground and pointing up did a good job.  Will do this again with the raw materials below.