Above is the flag of the State of South Carolina.  It features a crescent moon and our beloved Palmetto tree.

Often our state flag is modified to make a point.  Its design lends itself to this kind of thing.  Credit to Gil Schuler Graphic Design (gilschulergraphicdesign.com).

A huge rebellion against the Confederate Battle Flag posted on the front grounds of our state house is brewing.  Again.  This is old news, of course.  One Republican governor recently occupied his office only for one term, and his support to take down the battle flag was a big part of his defeat.  Today, Saturday, the state house will be the site of two demonstrations.  At 1:30, a group organized under the idea of “let us vote” (for or against the idea of taking down the flag) and at 6 PM, a demonstration, as far as I can tell, sponsored by no one will demonstrate for taking the flag down. 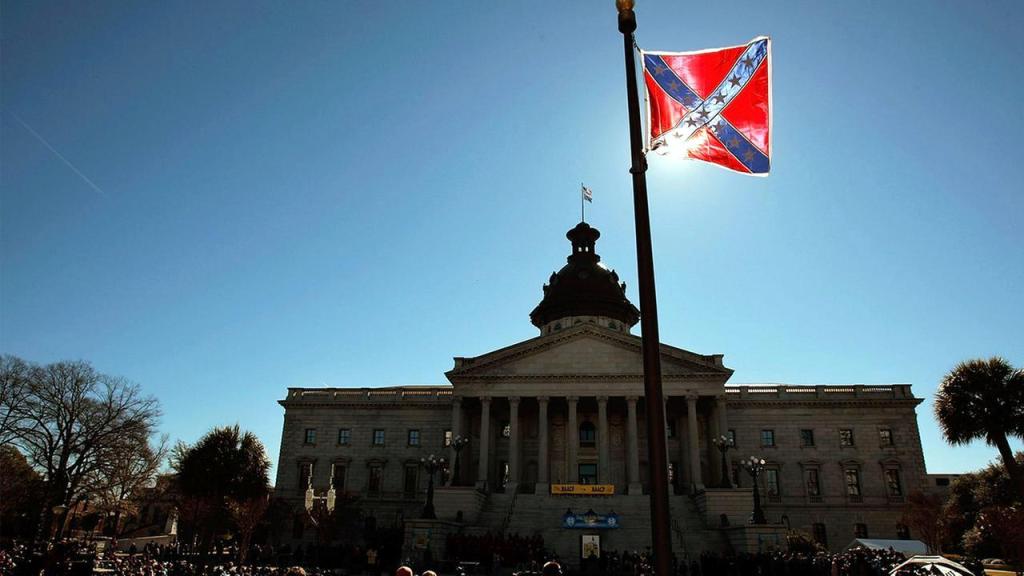 I think the taking down of the flag may be achieved this time.  But probably not without violence.  I lend my physical self to demonstration anytime I can.  It is a right, and a powerful feeling to be part of a mass that believes the way you do.  But these days, one has to think twice.  If this event has no sponsor, will there be security?  This week in South Carolina, although almost nothing is being spoken about other than the tragedy in Charleston, there is the dangerous fringe element, one of which now sits in jail.  Should we go?  Should I subject my family to this danger?  If nine people could be murdered in a church while studying the Bible, my choice seems like a no-brainer.

In the 80s during the beginning of the AIDS scare, I sent my children to daycare.  It was the right thing to do even though kids bite and blood could be exchanged.  Some here pulled their kids out. Not in favor of stigmatizing anyone, or acting like Chicken Little, we trusted that nothing would happen.  Nothing did.

If it weren’t for the guns that are everywhere, I would trust this time.  Can I?

Things to which I gladly gave my time can barely be accomplished anymore.  Not fair.  Having been so long out of the loop, this WordPress format is even new.  That’s the thing about technology.  It does not stop, and it does not suffer fools.

My sad story began in April when Microsoft said that it would not support Vista anymore.  Happily running it on an old familiar Dell, I hated to change.  But the “unsupported ” word did not sound good.  And someone told me it had to do with the Target crisis before Christmas.  Maybe it would be unsafe to use my credit card.  Maybe there would be malware hi-jinks in my circuits.  Unwilling to gamble, I bought a new HP Envy.

I know almost nothing about computers.  But in collecting comments from others, including a Geek Squad employee, it is my judgement that we bought a computer that is too sophisticated for the countryside where we live.  Our signal is just too “limited” (so says the Envy) to do any good most of the time.  Typing now, I am holding my breath.  Who knows how long this window of connection opportunity will go on?

Our Verizon Mifi has an only weak signal.  Glenn’s older computer uses it just fine.  My computer tries to swallow it, and says “3G? No way!”  We all used 3G in the past.  It was fast and certainly adequate for us.  My Geek Squad friend told me that it would be impossible for him to install Picasa on the new computer.  It would take days: I would have to bring it in.  What?

We tried satellite.  The poor hot man dug six holes around the area of our acreage where there are not trees.  No luck.  We have spent hours on the phone with Verizon.  ATT is not interested in working in our area;  we have no cable service out here.  It seemed our only solution was to buy a 250 dollar signal extender from Verizon which we could only return for TWO WEEKS.  After that, we ate the money.

The two week interval made us postpone the solution as we had trips to make.  We didn’t want to waste any of our precious testing time with being out of town.  Upon returning, I went to buy the box.  We had been given misinformation, the box only works if you have high speed internet at your house. Catch 22.

So there we are.  No solution, no fixes.  My friend Helen says that you cannot face to face renew your hair cutting certificate in South Carolina.  It has to be done on-line.  I am sure there are other examples of why a satisfactory internet connection is a human right.  I have heard stories on NPR where in Africa, villagers use their computers, save up their communications somehow, and then a cyclist powering a service device zooms by on the road and collects the waiting data.  Couldn’t we at least have that out here in Orangeburg County, Mr. (YOU LIE!) Joe Wilson??